This white paper summarizes main points from the conference of the same name, "Aligning the Food System to Meet Dietary Needs: Fruits and Vegetables,” held at the University of California, Davis, in June 2017. In collaboration with the Horticulture Innovation Lab and the Program in International and Community Nutrition, the UC Davis World Food Center convened a group of stakeholders to provide guidance to increase nutrient-dense fruit and vegetable consumption and offer consensus on research gaps that could improve implementation effectiveness. 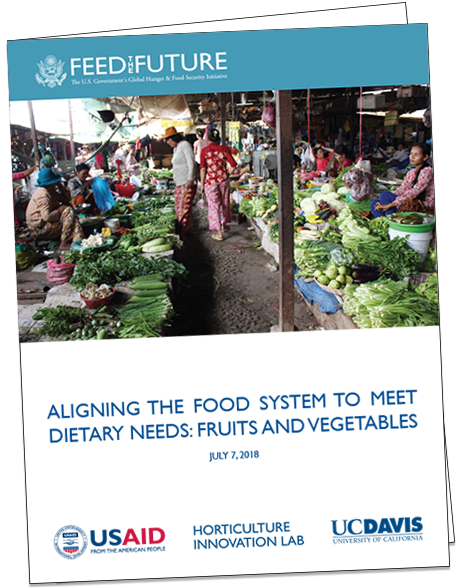 See the complete white paper, as prepared by the Horticulture Innovation Lab, with key points and references made by nutrition and food systems researchers during a UC Davis conference. Below are select sections and excerpts.

Poor diet is the leading cause of disease worldwide, and by 2020 it is projected that nearly 75 percent of deaths will be due to diet-related causes. This projection will likely impact both higher and lower-income groups, as well as urban and rural populations, including the 64.6 percent of poor working adults in agriculture. To tackle this issue, leading scientists, nutritionists and economists from academia, agriculture, government, industry, and non-governmental organizations spent two days at the University of California, Davis, discussing strategies for increasing the production and consumption of fruits and vegetables as a path to obtaining adequate diets and increased incomes in domestic and transitional economies.

Although often neglected in calorie counts, eating horticultural crops provides critical nutrients for a balanced diet. Diets low in fruits and vegetables contribute significantly to some of the world’s most widespread and debilitating nutrient-related disorders. Farmers growing high-value crops, such as fruits, vegetables, flowers and/or herbs, consistently earn more than those growing other commodities. Horticulture can be an engine for agricultural and economic diversification.

As the world sees higher rates of disease, decreased arable land, and possible food shortages, production choices are critical to health and to the social and economic mobility of farmers. Continued and increased investment in horticulture for nutrition and small-scale farmer income is critical. Strategies that governments, non-governmental organizations, and others can employ to increase fruit and vegetable consumption include better production practices, increased agribusiness and entrepreneurial activity, reduction in postharvest losses, and greater awareness and education about the benefits of fruits and vegetables.

Poor diet is the leading cause of disease worldwide. Of the 11 leading global disease risk factors, six of the top nine are linked to poor quality diets. While poor diets are a key driver of malnutrition and growing rates of obesity globally, fruits and vegetables are among the few food groups with positive outcomes for both undernutrition (e.g. micronutrient deficiencies) and overnutrition (e.g. cardiovascular disease, overweight and obesity).

Fruit and vegetable consumption can prevent weight gain and reduce risks for chronic disease, including cardiovascular disease and type 2 diabetes

Fruits and vegetables can reduce the risk of cancer

Phytochemicals and antioxidants found in many fruits and vegetables may reduce cancer risk by preventing oxidative damage to cells. Certain types of vegetables such as leafy greens may protect against certain types of cancers including mouth, throat, esophagus and stomach cancers. Another example is tomatoes, specifically lycopene in tomatoes, which may offer protection against prostate cancer.

With diverse crops, intercropping, and short growing cycles, vegetable production can provide income to smallholders and reduce risk, building the economic resilience of farms in the face of climate change. Farmers can choose to consume the fruits and vegetables they grow and/or sell them to earn income, which they can use to purchase other goods such as animal-source foods, contributing to both food and nutrition security. In addition, income from fruit and vegetable sales has the potential to accrue to women, as compared to staple grains or cash crops that tend be culturally-identified as male.

The production of fruits and vegetables can generate greater income, particularly on smaller landholdings, than cereal crops

Fruits and vegetables are high-value crops that can typically earn a greater income on smaller landholdings than cereals, benefitting households with less land. Data from Niger, Vietnam and Cambodia reveal that profits per hectare are 3-14 times higher in vegetable production as compared to rice production. Moreover, farmers who produce fruits and vegetables often have higher net farm incomes than those who produce only cereal crops; up to 5 times higher per family member as demonstrated by a study in Kenya. Because vegetable production and handling is more labor intensive, vegetables tend to generate more employment per hectare than cereals, especially considering jobs along the value chain in packing houses and processing.

Compared to cereals and commodity crops, investments in fruits and vegetables are tremendously low. The 2014 U.S. Farm Bill outlaid $700 million for indirect spending on fruits and vegetables (“specialty crops”), while nearly $5 billion was directly spent on commodity crops. Internationally, CGIAR does not have a fruit and vegetable-specific research program and spent approximately $220 million in 2012 on research for only three crops: rice, maize, and wheat. Furthermore, in 2013, the World Vegetable Center (previously known as AVRDC), a non-governmental agricultural research institute, had a total budget of only $13 million, about 1 percent of CGIAR’s research funds.

Increased production and reduced postharvest losses of fruits and vegetables

Using agrobiodiversity to increase availability of fruits and vegetables and to promote dietary diversity: While the global food supply is becoming increasingly homogeneous, genetic diversity, in both wild and cultivated species, has been used by plant breeders for centuries to improve yields of fruits and vegetables. Agrobiodiversity can also be used to provide a portfolio of micronutrients and allows a source of important traits for breeding stress-tolerant, nutritious crops.

Global food production is adequate to provide roughly 2,800 kilocalories per person, per day, yet supply of fruits and vegetables falls 22 percent short of the recommended amount, and in low-income countries, this deficit is even higher at 58 percent. Another key constraint to increased fruit and vegetable consumption is affordability. In some countries, it may take 40-70 percent of household income to purchase fruits and vegetables, and fruit and vegetable price projections show a 30 percent increase (without climate change). With climate change, projected prices could be even higher, impacting affordability and accessibility.

Affordability is essential to increasing consumption. Although increasing production and supply could decrease prices, increased demand could help maintain a stable equilibrium. Thus, it is also important to decrease unit costs of production for fruits and vegetables. Data from Bangladesh, however, indicate that people are willing to spend a greater portion of income to diversify their diets.

Improved information, access, and desirability can increase fruit and vegetable demand, and must be combined in order to achieve and sustain diet change.

Why invest in fruits and vegetables?

Throughout the conference, presenters and participants discussed gaps in the literature and made recommendations for future research. The complete white paper includes a number of emerging, researchable questions related to these larger topics:

See the white paper PDF for details, including research questions and cited references.

Investments should be made into fruits and vegetables because they are critical for human health, addressing both under and over nutrition, including reducing micronutrient deficiencies and risks for chronic disease and cancer. Production of fruits and vegetables can also generate significantly more economic benefits for smallholder farmers, including women and youth, and have the potential to earn more income than cereal crops, even on small plots of land.

Strategies to increase fruit and vegetable consumption should be rooted in systems thinking, including increasing agrobiodiversity to promote resilience against climate change, using all available land for smallholder production (home gardens, urban agriculture, etc.) and reducing postharvest losses through innovative low-cost technologies. However, affordability and accessibility are crucial for increasing demand and consumption of fruits and vegetables. Investment in fruits and vegetables will significantly increase production and consumption through creative, collaborative and evidence-based solutions.

About conference organizers, speakers and contributors:

White paper 2017 Aligning the Food System for Fruits and Vegetables 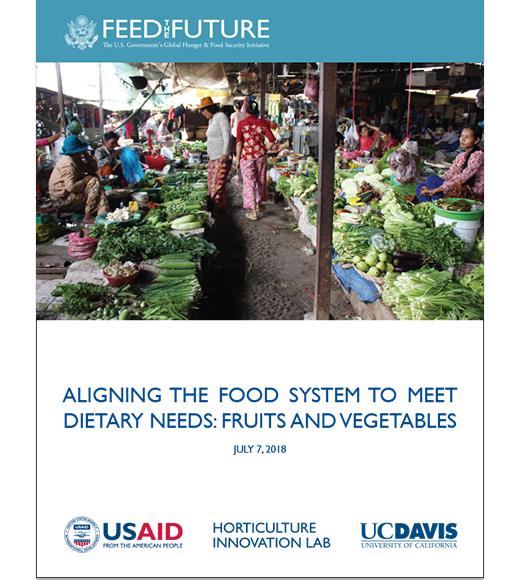 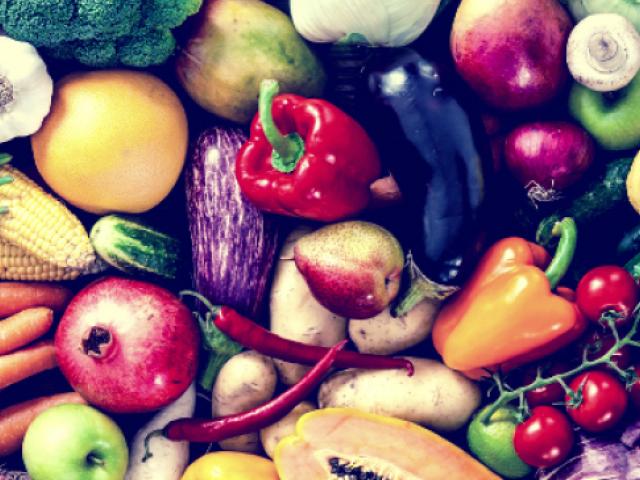 More about the event: Aligning the Food System

Presentations from the event that sparked this white paper, hosted by the UC Davis World Food Center, in collaboration with the Program in International and Community Nutrition and the Horticulture Innovation Lab

More about the Horticulture Innovation Lab's work with Nutrition

How to cook sweet potato leaves, with thanks from Ethiopia

Did you know the leaves of the sweet potato plant are also a tasty, nutritious food? In Ethiopia, where sweet potatoes can be a staple crop, a UC Davis student recently helped farmers reconsider their sweet potato crop in a new culinary light. Watch this video...

With nutrition in the spotlight at the Borlaug Dialogue, the Horticulture Innovation Lab joined with the World Vegetable Center and Catholic Relief Services to co-host a side event focused on horticultural crops.

A pregnant farmer growing nutritious vegetables in 100 degree heat was the impetus for an article on the Huffington Post last week about hidden hunger, Cambodian farmers, and the

African indigenous vegetables and women who grow them in Zambia are the subject of two videos made by a team from Rutgers, the State University of New Jersey.

An international team of researchers with the Horticulture Innovation Lab has been strengthening the value chain of African indigenous vegetables — with nutrition always in mind.