How nethouses are helping Cambodian farmers transform their food system

This Horticulture Innovation Lab video was created in May 2019 to highlight how nethouses are building resilience in Cambodia, by improving farmers' incomes and making "safe vegetables" more widely available to Cambodian consumers. The video was created by Brenda Dawson, with footage shot by Mat Loyola, Thort Chuong, and Sophorn Art.

In Cambodia, vegetable farmers have started to grow their crops under nets, to earn more money and better adapt to environmental challenges.

"So here we are looking at one of the nethouses that has been produced," says Karen LeGrand, UC Davis researcher, in the video. "The nethouses are a way to protect crops from insect damage by creating a barrier between the crops and the insects — and so it helps farmers reduce their pesticide use."

The video is narrated by Karen LeGrand, who is part of an international team of researchers from the University of California, Davis, working with scientists from Cambodia’s Royal University of Agriculture and the University of Battambang to improve food safety and vegetable value chains.

Their work is supported by the Horticulture Innovation Lab, a global network of researchers who first started working with nets in Kenya. Their team brought this idea back to Cambodia. Nets are a very flexible technology, and we’ve conducted participatory research with local farmers to adapt practices in ways that meet local needs.

The video introduces viewers to Mr. Keo, one of the first farmers in Cambodia who worked to test nets on his farm. He worked with the team to design and test taller nethouses. Local farmers prefer this design so they can walk inside to care for their plants.

Inside the nethouses, their crops look beautiful — but they don't have to use chemical pesticides, which improves food safety. The research team documented that farmers who use nethouses save nearly 30 percent in input costs because they don't need to buy pesticides.

The Horticulture Innovation Lab team also connected farmers who use nethouses to marketers like Bun Sieng in Phnom Penh. Her shop specializes in selling vegetables grown without pesticides. She and her customers are willing to pay a premium for chemical-free produce.

Besides higher prices, using nethouses also provides Cambodian farmers with options for micro-climate control. This helps reduce damage from heavy rain, provides shade, and allows farmers to diversify their crops for market windows — all of which can help mitigate changing weather patterns and price fluctuations.

For Om Pet, another farmer featured in the video, additional income from his nethouse has meant building a beautiful new home. Examples like these mean even more farmers are interested in investing in nethouses for their own fields.

The project started with just nine small nethouses for farmers to test and use.  With additional support from partners, the community has built more than 50 nethouses with a small private business that started up just to supply this new demand for nethouses.

Now the team has seen other organizations and Feed the Future projects in Cambodia adopt nethouses in even greater numbers. More Cambodian farmers are using nethouses to improve their family’s resilience, diversify their income, and increase stability in the face of economic and environmental challenges. This innovation is helping transform the food system in Cambodia. 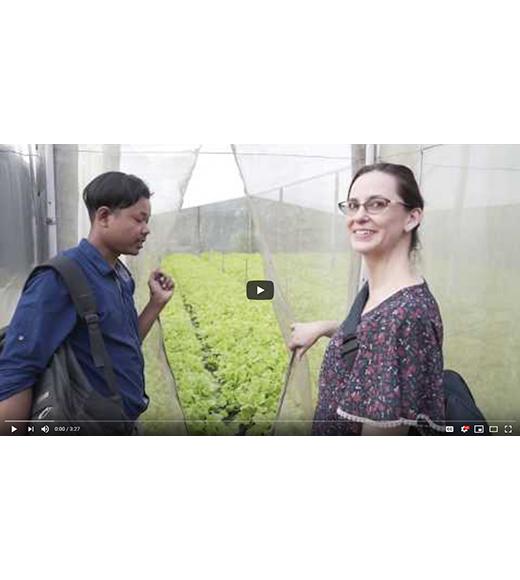