In October 2012, Horticulture CRSP researchers completed a year-long training for 36 postharvest “master trainers” from seven different African countries.These 36 trainers were the first gradu­ates of the new Postharvest Training and Services Center at AVRDC-The World Vegetable Center in Arusha, Tanzania. After a year of online learning and men­toring, the budding trainers each spent a week at the new center for a final round of education, culminating in their first opportunity to lead farmers in improving postharvest practices. “This project vastly increases the num­bers of experts we have in postharvest in the continent,” said Amanda Crump, Horticulture CRSP associate director, after attending the final training and opening. “It was great to see them immediately ap­ply all that they had learned through the year to train local farmers.” Over the course of the year, the master trainer candidates each completed a series of 10 assignments that ranged from a commodity systems assessment to devel­oping training materials and designing training programs and their own version of a postharvest training and services center.

These trainers then met in Arusha to complete their training and explore the Horticulture CRSP Postharvest Train­ing and Services Center. In two groups, 18 trainers spent a week reviewing their knowledge, asking final questions and developing relationships with postharvest experts including Diane Barrett of UC Davis, Lisa Kitinoja and Lizanne Wheeler of the Postharvest Education Foundation, and S.K. Roy of Amity University. The trainers learned about and demonstrated a variety of postharvest technologies, including a zero-energy brick cooler, solar dryers and others. They learned how to operate various tools for postharvest, in­cluding sizing rings, color charts, chlorine test strips, refractometers, digital ther­mometer probes, scales and others. Upon graduating, each of the trainers received a postharvest toolkit with these tools to help them get started with their next task—training farmers in their own countries and ultimately opening up their own postharvest training and service centers. With these technologies and tools, the candidates provided demonstrations for more than 100 local farmers on posthar­vest processing, fresh handling, drying, and food safety in their final day of transi­tion from trainee to trainer. Among the local farmers were also members of the Tanzania Agriculture Productive Program (TAPP) and the Tanzania Horticultural Association (TAHA).

Lisa Kitinoja of the Postharvest Educa­tion Foundation, and leader for the World Food Logistics Organization on this Horticulture CRSP project, highlighted the opening of the Postharvest Training and Services Center as one of the most im­portant accomplish­ments of the project so far. “The site is now be­coming a gathering place for local farmers, extension workers and postharvest researchers, just as we intended,” she said. The model of the Horticulture CRSP Postharvest Training and Services Center at AVRDC not only includes education in improved postharvest practices, but also sells equip­ment and services—so that such centers can be self-sustaining. Throughout the next year, Barrett, Kitinoja and other partners will continue to offer local training programs at the Postharvest Training and Services Center, while also supporting the new master trainers as they provide postharvest programming for small-scale growers, marketers and processors. “I think we all learned that this kind of hands-on, practical training takes more time and effort than we first expected— but the rewards for hard work have been higher than we anticipated also,” Kiti­noja said. “Many of our new ‘postharvest specialists’ are already working together on postharvest research projects or writ­ing new proposals for training programs, while others have been hired for consult­ing assignments in the region or awarded fellowships that will allow them to continue their postharvest studies and/or extension work in their own countries.” 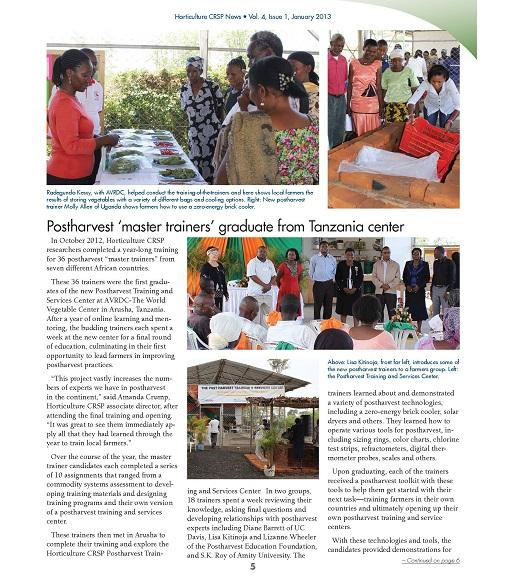