For the last five years, the 30 hectare marshland at Rugondo in Tambwe cell, Ruhango sector has been cultivated by 453 cooperative members made up of 262 women and 191 men. To target the in-demand crops for the market, vegetables like eggplant, cabbage, tomato and amaranth are annually rotated with maize. The production cost is high due to seasonal price fluctuations, losses from poor handling and inadequate storage.

Postharvest solutions that increase the quality and life of vegetables through handling, storage and better packaging can greatly enhance farmers’ income. As a result, the Horticulture Innovation Lab's "Reducing Postharvest Losses in Rwanda" project is working to address postharvest issues in the country’s horticulture value chain. Implemented by Agribusiness Associates Inc., the project aims to increase food security in Rwanda, by understanding and identifying the most efficient ways to reduce postharvest losses.

The project team has organized on-farm trainings of farmers on appropriate postharvest handling techniques aimed at reducing the losses at different stages of vegetable production.

“Before being trained by the project on using crates and the Zero Energy Cool Chamber (ZECC) in November 2018, I was losing 50 kilograms of produce every week because of over-ripening at the farm and the produce being stored at an ambient temperature in an open room of my house,” stated Leonce Kanamugire, a farmer of Tambwe cell and one of several hundred of farmers benefiting from the project.

The project has trained UATA, Kanamugire's cooperative. In turn, UATA has helped Kanamugire construct his own ZECC. The project has also supported him with ten crates. He is storing eggplants, chili pepper, and amaranths in the ZECC before transporting his vegetables in crates to market where his high quality produce arrives without any hint of spoilage. Consequently, his newly acquired postharvest practices have earned him a higher income.

“Before the training, when I was delivering my produce at the market, the quality was not good as there were no sorting and grading practices," Kanamugire said. "At the market, I was getting the price of the second-grade produce.”

He is currently growing eggplants on a 0.06-hectar plot. He estimates that his production costs are 75,800 Rwandan Francs. On this plot, he produces sixty 40 kilogram bags of eggplants — harvesting the eggplant about eight times per season. He earns about 4,000 Rwanda Francs per bag and grosses a total of 240,000 Rwanda Francs per season. The project staff visited him recently. Kanamugire, who has four children, advises his colleagues to overcome the losses by taking advantages of ZECC and crates. Indeed, most cooperative members are making more income from their vegetable production than their maize production with the adoption of good postharvest practices. They hope to keep using the technologies in order to continue delivering high quality produce to consumer's homes.

This story was shared during the Rwanda Postharvest Conference in Kigali, Rwanda on June 6, 2019. 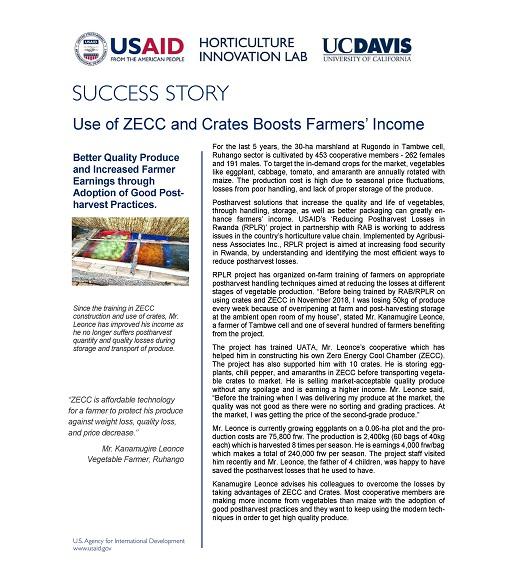