This presentation was created by Patricia LaPorte, Brent Sipes, Haddish Melakeberhan, Catherine Chan, Amilcar Sanchez-Perez, and Anabel Sacbaja for the Horticulture Innovation Lab project focused on managing nematodes and soil health in Guatemala.  The presentation was shared at the Society of Nematologists annual meeting in 2017.

The "Managing nematodes and soil health in Guatemala" project boasted a transdisciplinary team of nematologists, pathologists, social scientists and a soil scientist. Experts worked together to co-design the project's experiments and co-analyze the results.

In the Western Highlands of Guatemala, potatoes are a cash crop – with 25 percent of the crop being exported to Honduras and El Salvador. But potato crops have suffered a 50 percent yield loss over the past 20 years. This yield loss is linked to the presence of cyst nematodes (Globodera, Punctodera, and Meloidogyne) and over-use of the soil.

The "Managing nematodes and soil health in Guatemala" project took place in Huehuetenango and Quetzaltenango (Xela). These Guatemalan departments are 70.5 percent rural and 83.5 percent of residents live in poverty, with 33.2 percent living in extreme poverty.

The project's aims are two-fold: to improve the yields of potato crops through conservation agriculture interventions and to deliver these interventions to growers effectively so that they are deployed long after the project has ended.

Key tenets of conservation agriculture include maintaining year-round soil cover over potato fields, minimizing tillage and utilizing crop rotations with a principal staple crop of the region. The project also worked to introduce the biological controls, including Trichoderma, Purpureocillium lilacinum and Bacillus subtilis to growers.

The project team spearheaded their research for the project with three focus groups consisting of 6-8 individuals to gain information about farm profiles, production costs and marketing\ information. Through these focus groups, the researchers discovered that men do most of the farming activities while women plant and harvest. They also found out that farmers rotated potato crops with maize, but lacked irrigation systems. Farmers also had limited use of intercropping and certified seeds. Chicken litter and composted animal manure were the most common soil amendments in the region.

The team also worked with farmers to do mental modeling to understand how farmers perceive the connections between soil health, nematodes, fertilizer, their livelihood, scientists, other farmers and policy makers — grounding their interventions with this data. 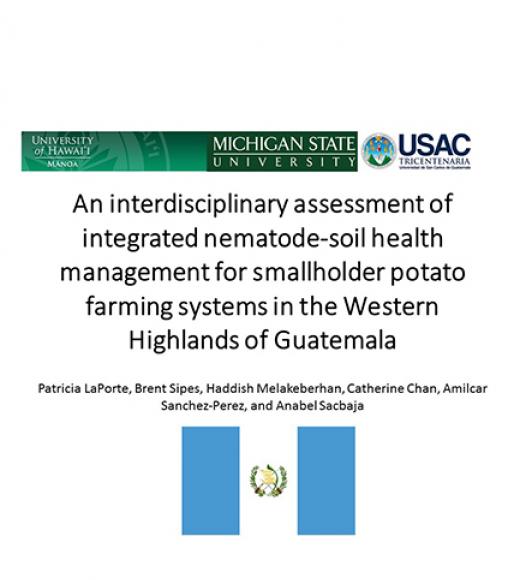