In Guatemala, potato farmers are losing their spuds to a microscopic menace – potato cyst nematodes.
In the Western Highlands, nematodes have been blamed for cutting crop yields in half over the past 20 years. Small-scale farmers are responsible for 75 percent of Guatemala’s potato production, digging ditches in steep cliffs to plant the tubers by hand. They save smaller potatoes for their family and sell larger, more valuable potatoes at markets.

The nematodes tunnel into the roots of potato plants to feed, where they grow into fat, circular-shaped cysts. Their presence reduces the quantity and size of potatoes, robbing farmers of income and nutrition. Pesticides to eradicate nematodes are neither readily available nor culturally sanctioned in the region.

Researchers supported by the Feed the Future Innovation Lab for Horticulture have been working with smallholder farmers near Huehuetenango and San Marcos to rid crops of this tack-sized pest, which thrive in degraded soils. Improving soil health creates a complex soil food chain where the nematodes are suppressed and beneficial organisms prosper.

“Cognitive mapping helps us understand how the community is thinking, to tailor our workshops and teaching so that we can target misconceptions and linkages that they do not see,” Sipes said.

One finding was that that many farmers were distrustful of certified potato seeds which they blamed for attracting nematodes to their crops.

Through the mapping, the team identified two effective interventions to recommend to farmers: incorporating composted chicken litter into their soil and applying Trichoderma and Purpureocillium lilacinum. These fungi attack nematode eggs and are a biopesticide treatment sold by Popoyán, a Guatemalan company.

In one community where farmers believed chicken litter attracts nematodes, the researchers instead encouraged them to mix composted horse litter into their soil.

From the cognitive mapping, researchers also learned that farmers relied on cooperatives to learn new farming practices. Thus the team is sharing their techniques with two prominent potato cooperatives, so these strategies can be shared more widely and long after the project has ended.

Sipes reflected that soil in the region is so depleted that it may take years to restore its health.

“In the long term, I hope that we have an impact in teaching farmers about the incorporation of more organic matter and soil health,” he said. “I hope that by knowing that they have a nematode problem, they make better choices.” 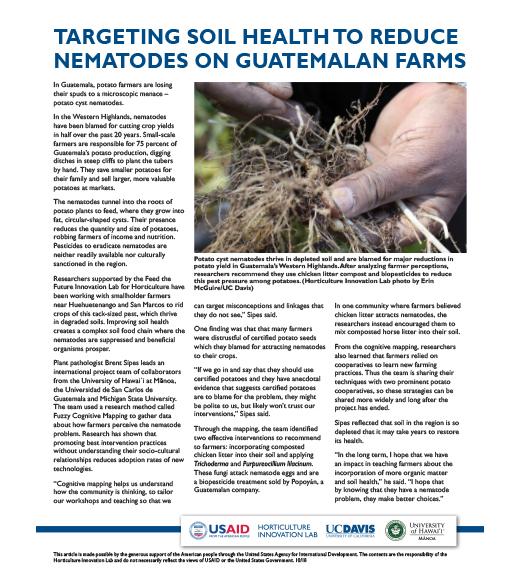