Our methodological framework is both reflexive and pragmatic. Theoretically, we integrated commodity network analysis with socio‐political theories to examine democracy, bureaucracy, and power within the Rooibos commodity network. Methodologically, we incorporated Amartya Sen’s human capabilities approach, which engages capabilities as a more holistic measure of socio‐economic well-being. Participatory action research likewise informed all aspects of project engagement to ensure stakeholder empowerment. In terms of training delivery, we employed outcome‐based education to ensure active learning, assessment, and goal achievement. While these conceptual strategies are diverse, they are nevertheless complementary and synthesis evolved from a process of reflexive application and pragmatic adaptation.

Over the course of the project, we facilitated multiple activities. To begin, the project team identified emerging Rooibos communities and invited project participation. We then held preliminary capabilities workshops within seven participating community groupings, which culminated in gender equitable farmer leader elections for subsequent project engagement. We engaged findings from capabilities workshops to design a series of three multi‐day training‐of‐trainer (ToT) programs which we held with farmer leaders during the first three project quarters. As part of this process, leaders assisted in developing a modular toolbox of training material and related farmer guide to standards and certification for their use as future trainers. Concurrently, we began leadership industry networking activities, which we continued to expand upon throughout the project. At project mid‐term, we conducted in‐field research training to enable leaders to actively participate in developing and conducting emerging farmer interviews in their community groupings. At this time, we additionally began theoretical training to secure leader involvement in subsequent data analysis and to help leaders develop the democratic and bureaucratic skills necessary for actively industry engagement.

In final project phases, we culminated industry networking activities by hosting a policy seminar at the University of the Western Cape, in which leaders presented research findings to core industry and certification body representatives.

These groups then engaged in break‐out sessions to discuss producer‐industry networking prospects. At project end, farmer leaders designed and facilitated workshops in their community groupings to deliver training in areas identified by their communities as most critical, and they additionally began the process of formally instituting an Emerging Farmer Working Group within the South African Rooibos Council to further enhance producer‐industry networking capacity. Consolidating project benefits, the Emerging Farmer Working Group will be fully institutionalized by the end of July 2011. Female farmer leaders have decided to continue to incorporate gender concerns within the main working group where they are equally represented and have become highly effective members, rather than developing a separate Women’s Networking Group. This institutional structure will ensure that female farm leaders are able to continue to productively engage with their counterparts and with the industry as a whole.

Most importantly, male and female farmer leaders were able to develop and transfer capacities. Leaders received training in the following areas: 1) market access, 2) standards and certification, including fair trade, organics, and Utz, 3) biodiversity, 4) food safety, 5) financial management, 6) effective communication, 7) industry networking, 8) leadership, 9) public speaking, 10) socio‐political theories, 11) research methods including interviewing and data analysis, and 12) Afrikaans‐English translation. While the diversity of training required us to repeat information in multiple training sessions, pragmatic application enabled leaders to retain much of what they learned. Indeed, final survey findings demonstrate that leaders were able to effectively share what they learned within their communities. For example, 100% of community members felt that the farmer leaders had good knowledge of the topics they presented in their community workshops, 82% said that their leaders had provided feedback on the training they had received, 78% had received feedback on leader industry networking activities, and 65% said they would go to leaders for advice before approaching external experts. The successful training of this group of farmer leaders and their demonstrated ability to share their knowledge with men and women throughout the community will strengthen the participation of emerging farmers in high value markets now and into the future.

At project end, we are pleased to announce that farmer leaders have continued to surpass initial expectations. Not only have they actively engaged in all project components, they have continued to develop as a strong group of committed stakeholders.

As the Emerging Farmer Working Group, this leadership group plans to develop strategies for securing ongoing training and funding opportunities. The South African Rooibos Council has likewise expressed an ongoing commitment to providing leaders with an enabling environment from which to operate. Leaders have established a positive industry presence and numerous actors have expressed interest in further collaborating with this group to capitalize on producer‐industry information exchange opportunities.

When we arrived in the Wupperthal communities in early 2010, we found them in disarray due to a number of serious problems and disagreements within the area’s Rooibos cooperatives. Many farmers were angry because they had not received payment for their crop in years and did not want to become engaged in any Rooibos‐related project as they felt further involvement would be a waste of their time. These challenges appear to at least partially stem from previously implemented top‐down projects which failed to invest in appropriate levels of capacity building. Given this backdrop, project outcomes are particularly striking. Not only have leaders united to develop an information sharing network that is focused on opportunity rather than conflict, they have been active in sharing market information with their communities in an effort to clear up misunderstandings. Leaders are now focused on developing potential steps forward. Via their involvement in research and data analysis, they have highlighted the common problems facing farmers and have expressed interest in working with certification bodies to engage bureaucratic solutions to cooperative issues. While we worked hard to achieve project objectives, leaders encouraged us to surpass original goals. They have displayed outstanding levels of enthusiasm, professionalism, and support and as a result, information exchange has advanced in multiple directions.

In summary, this project strove to enhance racial equity and combat poverty to improve the quality of life of emerging farmer households in one of South Africa’s poorest regions. We actively promoted gender equity by bolstering the participation of female emerging farmers in all aspects of project engagement. Ongoing attention to these ambitious goals of promoting equity, empowerment, and poverty alleviation ultimately shaped project success. Too often development projects tend to maintain a state of dependency, in which people remain unable to take charge of their own livelihoods. At worst, they may destabilize and/or demoralize already struggling communities. Empowerment through active capacity building can reverse this process, but for this to succeed, historically disadvantaged communities must have access to the enabling environments necessary for ongoing capacity building. This project demonstrates the importance of bringing farmers into projects as participatory stakeholders rather than as beneficiaries who must passively receive pre‐determined assistance. Farmer leaders in this project have proven themselves capable of facilitating the transfer of critical local knowledge to diverse groups, including industry and organizational actors, social researchers and scientists, and fellow community members. Their ongoing participation will ultimately enable all interested parties to secure more accurate information and thus more sustainable outcomes. The methodological model that we have outlined above may be applied within diverse commodity sectors and regions as a means of providing efficient yet effective support for producers and industries adapting to 21st century markets, which increasingly require rapid and coordinated response to emerging trends in standards and certification. 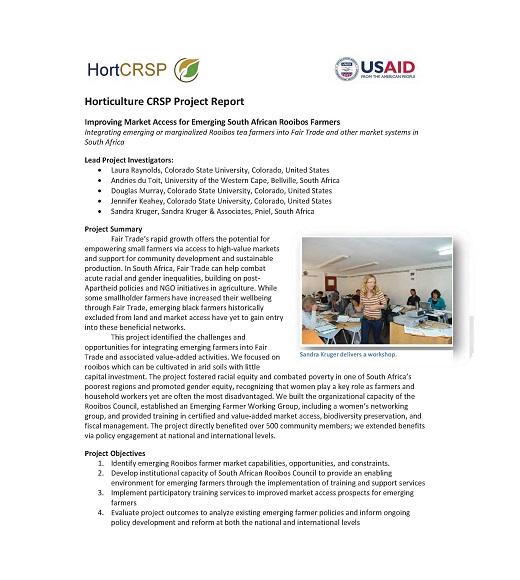