This presentation and group activity focused on incorporating gender considerations into farmer fields schools, and lessons learned from the process. During the Horticulture Innovation Lab's 2018 annual meeting, these presentations were given by Leif Jensen, Janelle Larson and Arie Sanders—and then Larson led the group in a hands-on activity.

The presentation began by laying a foundation for issues related to gender. While sex is biological, gender is socially constructed and comes with norms regarding rules and responsibilities assigned to men and women. these are shaped by ideology, religious, ethnic and economic factors, among others. Gender dynamics are malleable, and so can vary across space and time. Furthermore, gender is intersectional in that it interacts with other factors such as age, class and ethnicity.

In addition to being a basic human rights issue, gender inequity when it comes to accessing resources, empowerment and markets hurts women, men, families, the economy and society.

In agriculture, women play a key role, but face challenges such as constrained access to land, capital, extension services. According to FAO data, women on average make up 43 percent of the agricultural labor force in the developing world. Women are key to food security, but their work is undervalued and have different stores of environmental knowledge. If women were provided the same resources as men, their agricultural yields would increase 20-30 percent, raising total agricultural output in developing countries by 2-4 percent and thus reducing the number of hungry people in the world by 12-17 percent.

To be effective, food security researchers cannot ignore gender, yet data on gender relations and women’s role in agriculture are limited.

The team takes a gendered economy perspective, in that labor markets and other social institutions are the bearers of gender. These are arenas where gender-based inequities operate and are reinforced. Researchers are thus compelled to be attuned to normative, cultural, economic and political forces that shape gender inequalities. These equalities are found in labor markets, opportunity structures, household divisions of labor (reproductive and productive), empowerment, and access to and control over resources.

Researchers should collect sex-disaggregated data and consider how interventions affect intra-household dynamics such as time allocation, labor, power dynamics and claims on resources.

In Honduras, the project team has collected baseline data, brought together producer organizations for workshops to share their experiences, and organized farmer field schools. Key findings from the baseline data include:

The farmer field schools use the same model used for decades by the Panamerican Agricultural School, Zamorano, with the addition of integrating gender discussions into horticulture production training. The team worked in Intibuca, which is a horticultural production area and also part of a designated Feed the Future zone. The farmer field schools were held in Candelaria and Malguara.

The team found that considering gender in the logistics of planning the farmer field school were surprisingly important. Because people would have to travel to the sessions, they subsidized the costs of their travel. They also hired cooks to prepare local foods to serve during the sessions and to care for children during the sessions, taking care of tasks that women participants would otherwise be responsible for.

One young woman participant of the farmer field school noted that these arrangements made it clear that she was welcome to attend and participate: "Because you provided child care, I felt like I was really meant to be here."

Another observation is that gender norms in the division of labor persist. Some tasks are labor intensive such as double digging, and for the session focused on irrigation, men attended in place of women.

The team will analyze how successful the farmer field schools were, including evaluating whether the trainings contributed to a change in women's positions in their households.

One activity used during the project workshops separates participants into groups and as a group, they must draw a leader and identify attributes of a leader. For this activity, the groups prepared in advance to include some groups that are women-only, some that are men-only, and some groups that are mixed gender. This exercise provided an opportunity to discuss:

Field observations from this exercise in Honduras include:

In 2018, the Horticulture Innovation Lab held its annual meeting in Rwanda. The event brought together the program's international team, local horticultural experts, and development practitioners. This event's theme was, "Engaging youth as agricultural entrepreneurs." 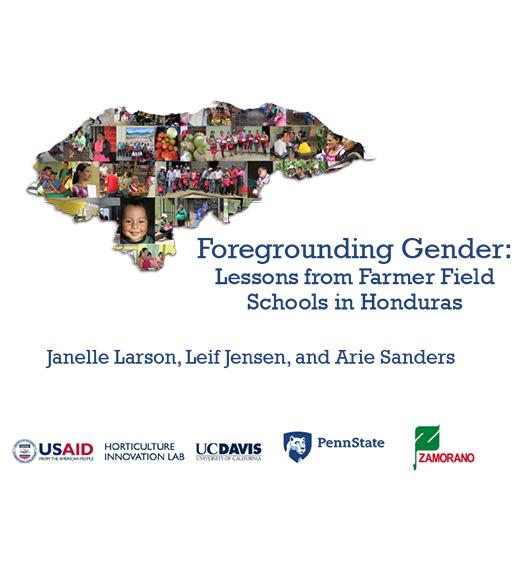