A panel focused on water management for nutrient-dense foods brought together professionals for a lively discussion about considerations in advancing irrigation for small-scale farmers, farmer-led irrigation processes, and related agricultural programming during the Horticulture Research for Development Conference, "Colorful Harvest: From Feeding to Nourishing a Growing World," held March 26, 2019 in Washington, D.C.

Gerik presented about a small-scale irrigation work that the Feed the Future Innovation Lab for Small Scale Irrigation is undertaking in Ethiopia. The project's design incorporates household surveys, field and farm research and design, modeling systems irrigation and scaled up irrigation design for the entire country of Ethiopia.

Emerging results and key findings include that groundwater availability and sustainability in the dry season may not be feasible for small-scale irrigation in some areas. On-farm water management is important, and groundwater recharge in Ethiopia can be improved using deep tillage. Irrigation scheduling tools and fertilizer guidance is needed to optimize water use and productivity; most irrigation technologies are profitable with high-value vegetable crops. Labor constraints and costs are key factors in profitability. Access to appropriate financing is low, and access to credit may increase irrigation adoption. In general, the small-scale irrigation supply chain in Ethiopia is underdeveloped. Gerik presented that approximately 1 million hectares of land are economically and bio-physically suitable for small-scale irrigation development in Ethiopia, with high adoption probability in areas of Lake Tana, the Ethiopian Highlands, and the Great Rift Valley. Small-scale irrigation development may also pose widespread water scarcity (mapped on the slides).

Rivera shared a profile of Hilario Chaves, a 20-year old farmer who grows high-value crops and staple crops on a 525 square meter plot. After adopting drip irrigation and other practices promoted by the project, his yield doubled in pounds and increased sales of $485. His wife also helps him maintain the farming plot, which employs four additional women during harvest season.

Salomon's presentation focused on innovations in dry season horticulture for women and smallholder farmers in eastern Uganda, through the Horticulture Innovation Lab project focused on developing farmer-led irrigation innovations. Salomon emphasized that "farmer-led" irrigation is in relation to how governments and projects interact with farmers, as an approach that aims to give farmers the greatest voice in how to adapt irrigation systems, rather than outside planners. This recognizes that smallholders’ systems are very complex and the value of their local knowledge.

In order to engage in farmer-led innovation, institutions must change from the status quo that "might makes right," and adjust their rules and norms regarding ownership and membership. Most Ugandan smallholders don’t have much formalized rules or organizations that govern irrigation. Fair systems are very hard to build up, but the team has found that establishing clarity in who uses which technologies has helped. Organizing groups around specific goals – such as accessing land or savings and credit have helped develop clearer and fairer institutions in irrigation communities.

Salomon discussed that the economics of irrigated horticulture in Uganda are quite varied, even within one irrigation community and profitability can vary at the plot level. Some farmers can make losses when others gain highly, largely due to additional horticultural challenges. But this variability makes it hard for farmers to invest in irrigation, especially when different members have different means. Integrating the well-known village savings and loan associations into irrigation groups can help bring a regular, well-monitored base for raising funds for maintenance and investments in irrigation.

Gender considerations in this project: The team found that "farmer-led" usually meant led by men, as there was a perception that women cannot manage "technology." But carefully managed farmer-led projects can also be a way to ensure women have a greater say in what technologies are used, how to access land, and how labor is shared, among other things. As women take leadership roles, men often do realize they are able to play a useful role and the project offers an opportunity to normalize women's participation. Women often reported better outcomes from cooperation than men did.

The Horticulture Innovation Lab hosted this two-day conference, "Colorful Harvest: From Feeding to Nourishing a Growing World," to gather the latest innovations and top researchers in the growing field of horticulture for development. 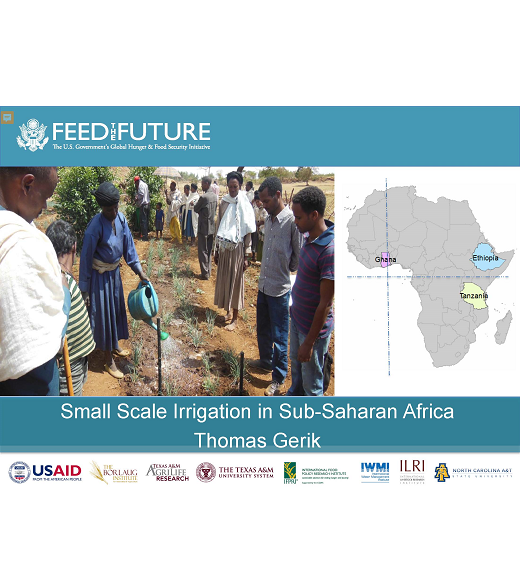