Bed nets are nothing new to international development, but a leading company in mosquito netting has turned its attention— and its nets—to improving agriculture.

Under Feed the Future, a collaborative research project has brought together A to Z Textile Mills in Tanzania with agricultural researchers to test its nets for growing fruits and vegetables.

The team is fine-tuning how smallholder farmers can use the nets to reduce insect pests and improve micro-climates in vegetable plots. Similar to its long-lasting insecticidal bed nets, A to Z’s “AgroNets” were developed with and without chemical treatments and for re-use over multiple seasons.

“This technology is, for the first time, adapted to smallholder farmers and available in Africa because of the mosquito net industry,” said Thibaud Martin, a CIRAD scientist based in Kenya. “This technology is truly an effective alternative to chemical use.”

In the project’s first six months, A to Z provided and delivered 1.5 tons of netting to Benin, Kenya and CIRAD partners.

“Partnership with A to Z was critical to the success of this project,” said Mathieu Ngouajio, professor at Michigan State University and a leader of the Horticulture Innovation Lab project. “They have made all the fine-tuning that we needed on the nets and supplied our team with the material for field studies. Without that type of support, it would have been impossible to achieve project goals.”

After two years of research, results in Kenya show the nets can indeed reduce pests and increase yields in tomato, cabbage, kale, onion, French bean, melon and carrot crops. Farmers have also tried the nets with other crops such as sweet peppers, amaranth, spider plant and strawberries.

“Use of AgroNets on cabbages, tomatoes (both field and nursery), French beans, and melons is not only efficacious against pests, but also offers great business potential for A to Z,” said Hubert Coffi, agronomist with A to Z’s research unit, the Africa Technical Research Centre.

In Benin, adoption of the nets by farmers has been particularly high. More than 75 percent of farmers in the project adopted the nets for use with nursery production.

Since the project started, the team has received additional funding from CIRAD, INRAB, Ecohort, Katarina University, SupAgro Foundation, and the French embassies in Benin and Kenya.

“Moving toward agriculture is for us a key strategic pillar for the coming years because it will help us to expand and diversify our operations and revenue stream while creating more jobs,” said Dr. Johnson Odera, director of the Africa Technical Research Centre.

“We still believe in the future of agriculture in Africa, and we want to be part of this success story,” he said.

Demonstrating nets and floating row covers in Kenya and Benin 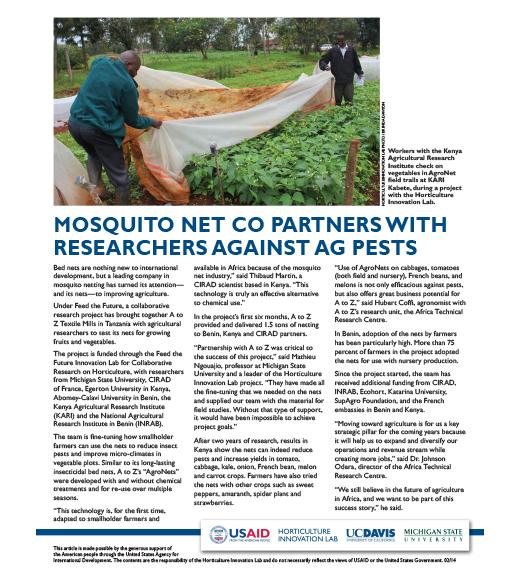