Karen LeGrand of UC Davis presented this technology flash talk about nethouses for pest management and improved food safety during the Horticulture Research for Development Conference, "Colorful Harvest: From Feeding to Nourishing a Growing World," held March 26-27, 2019 in Washington, D.C.

LeGrand is a UC Davis researcher, with an adjunct appointment at the Royal University of Agriculture, who leads the Horticulture Innovation Lab project focused on building safe vegetable value chains in Cambodia.

How to use a nethouse

A nethouse is made out of netting material held up by a support structure. This structure covers part of a field and acts as a physical barrier that protects crops from insect pests and environmental damage.

Nethouses are particularly appropriate in areas where pesticide resistance is a problem and can be used to reduce or completely eliminate pesticide usage while simultaneously improving product quality and chemical food safety. Nethouses can also be used to protect crops from damaging rain or sun, so they are particularly advantageous in places where tropical rainstorms pummel crops and limit growing seasons. Growing crops inside the protection of a nethouse can help extend the growing season for crops that don’t require pollination or varieties that self pollinate.

The structure and size of nethouses is easily adaptable to fit a variety of needs. Different supporting materials can be used, depending on what’s available locally.

Nethouses are a particularly appealing technology because they have strong social and behavioral reasons for uptake. For one, the concept is easy to understand (crops inside are protected from pests outside), and farmers readily accept this as an effective method of pest control. Since farmers don’t need to be convinced that nethouses are beneficial to them, they’re more willing to try using nethouses through their own initiative. Also, because nethouses are fairly big structures that are easy for neighbors to see, once a few farmers in a region start having success using nethouses, scaling within communities can happen organically.

The ease of establishing confidence in the effectiveness of nethouses helps develop an enabling environment within the private sector. Starting at the beginning of the value chain, a source of netting material must be identified. In some places, a supply chain for mosquito netting is already established and may be a resource. In Cambodia, the project team identified sources in neighboring Vietnam and Thailand and supported local entrepreneurs to establish import businesses that could supply raw netting material locally and serve as local providers of constructed nethouses.

On the other side of the agricultural value chain, marketers and consumers in many developing countries are concerned about chemical food safety and pesticide use. They can easily see how nethouses help address their concerns. LeGrand explained her project team supported a local marketing entrepreneur to build her business from a small stall in a wet market into a wholesale outlet that now supplies to the largest supermarket chains throughout Cambodia. The growth of her business has been grounded in a marketing campaign which focused on building brand power around nethouses.

The presentation includes quotes from farmers about nethouses:

The Horticulture Innovation Lab hosted this two-day conference, "Colorful Harvest: From Feeding to Nourishing a Growing World," to gather the latest innovations and top researchers in the growing field of horticulture for development. 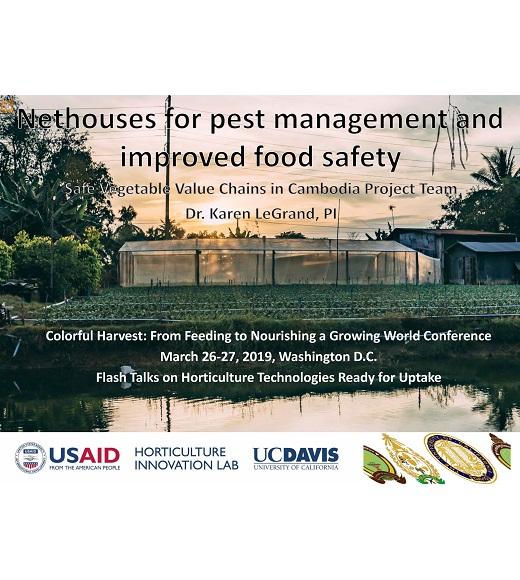