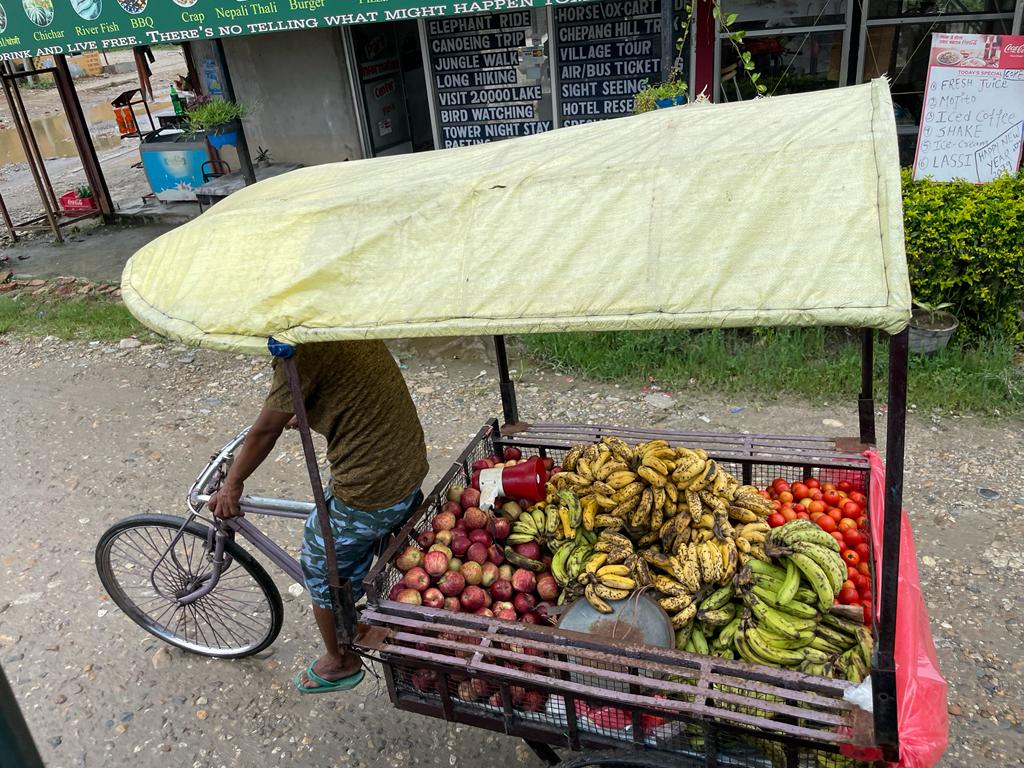 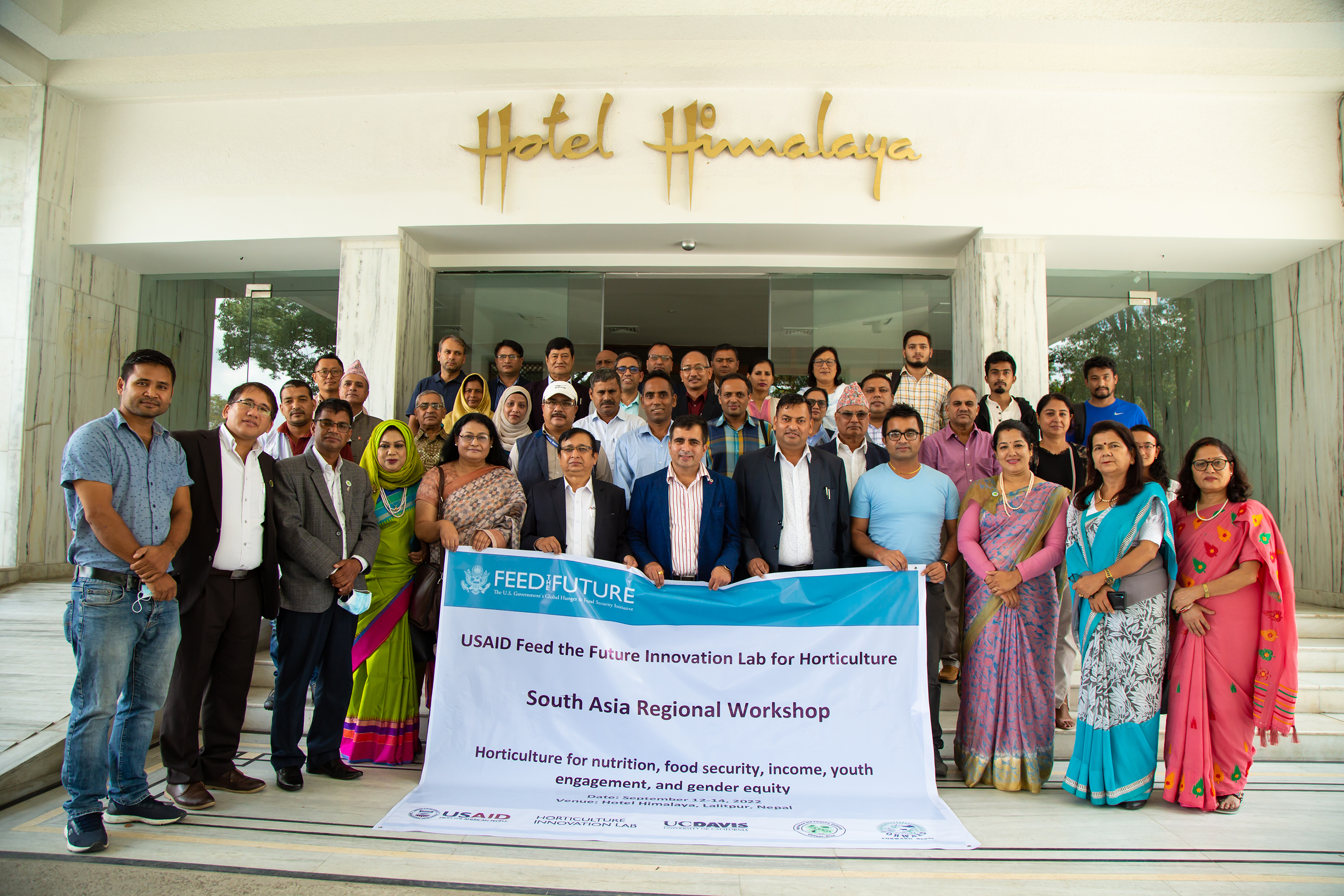 The South Asia regional horticulture workshop, hosted by FORWARD Nepal in September, wrapped up a series of four very successful workshops that took place in each of the regions Feed the Future Innovation Lab for Horticulture will conduct research in: East Africa (Kenya), West Africa (Ghana), Central America (Honduras) and South Asia (Nepal). The 3-day workshop featured experts in the horticulture sector from both Nepal and Bangladesh, with representatives from universities, NGO’s, research institutes, private industry, and government agencies creating a rich dialogue of diverse perspectives that highlighted a few major themes.

There is significant potential for fruit production in South Asia, but in order for this to be harnessed, farmers need access to improved varieties. The Catch-22 is that Nepal and Bangladesh do actually have high levels of fruit production–but due to a lack of high quality cultivars, the region experiences low productivity compared to other parts of the world. A main reason for this is that to save on expense farmers will utilize their own seeds to create the next round of fruit saplings--which by nature cannot retain all the features of the parent plant--instead of buying from a nursery. This can lead to trees that are susceptible to viruses and other diseases, and cannot produce the product quality necessary for market, especially for export. Biotechnology was proposed as one solution to this problem. Dr. Bahneshwor Pokrel spoke about the potential for micropropagation of fruit tree varietals, specifically, in order to create lab-grown cultivars that will stay true to their original characteristics. Innovations like these may be necessary to meet the growing demand for fruit both regionally and internationally, and as South Asia becomes increasingly threatened by climate change, fruit orchards may be a sustainable and profitable solution to increasing forested land area in places like Bangladesh which currently fall below recommended levels.

There is currently a massive outmigration of men in South Asia–both to cities and to other countries–which has left women to manage farms. The 10% increase of women in agriculture has exposed severe gender disparities that inhibit their participation in the sector. For instance, they don’t own their own land (only 21% of land is women-owned), can’t obtain loans, have limited knowledge of and comfort with farm equipment, and don’t have access to infrastructure that supports mothers (e.g. women at the market don’t have a place to breastfeed). Yet the shift to women-run farms also presents a great opportunity to increase gender equity in the region, since the very fate of agriculture in some areas depends on it. Presenters stressed that in order for this to happen, women farmers need more support from the government in the form of subsidies that are tailored specifically to help them. Despite the barriers before them, women in South Asia are becoming leaders in the fight to protect their countries against the onslaught of climate change. A striking example of this comes from Ms. Swastika Shrestha, a student at the Agriculture and Forestry University (AFU) in Nepal who was selected to give a presentation on an innovation she was testing that uses plant-based alternatives to plastic packaging for fruits and vegetables.

Nepal and Bangladesh are two of the most vulnerable countries in the world to climate change, according to various ranking criteria. Nepal--with its steep terrain and heavy monsoons--is highly prone to natural disaster, especially as temperatures continue to climb. This will cause flooding and erosion events to become more frequent and more severe, with particularly  devastating impacts on remote villages with little access to the rest of the country. Bangladesh, on the other hand, consists of very low-lying land that is highly affected by ocean flooding, causing salt intrusion that negatively impacts crop production.

The extreme climatic conditions of both countries will only increase in intensity with climate change, but there are also a lot of people, like those that attended the conference last month, who continue to research and innovate new climate adaptive ways for agriculture to meet a growing population (25% of the world’s population now lives in South Asia). In some ways, South Asia is taking the lead in sustainable agriculture, for example Nepal’s National Organic Accreditation Body. This is a government-run program that certifies entire states as organic. However, presenters at the conference pointed out that in order for this system to work, government agencies on the national, regional, and local level need to improve their communication channels. They also stressed the importance of increasing research and extension on organic production, as current knowledge of organic practices and inputs is limited. For example, farmers may brand their products as organic as long as they are not using chemical fertilizers or pesticides, even if they are not abiding by organic standards. There are also farmers who only have access to older, unsafe pesticides that are highly toxic. This is one of the many reasons researchers at the workshop emphasized the importance of a robust extension system where agents receive skill-specific training rather than a more generalized focus.

Thank you to everyone who attended in-person and remotely, especially all those who gave such compelling presentations. So many important insights surfaced during this conference that will inform the future of horticulture research in the region. Special thanks to FORWARD Nepal for hosting and making it such a success! We are excited to continue working with our Nepali and Bangladeshi partners over the coming years.