This handout focuses on low-cost pest exclusion and microclimate modification technologies for small-scale vegetable growers in East and West Africa, as part of the "Demonstrating nets and floating row covers in Benin and Kenya" project. This poster and handout were presented by Vance Baird of Michigan State University.

The handout describes the problem, approach, and impact, and is supplemented by an additional flyer on scaling technology.

On demonstrating pest-exclusion nets in Benin and Kenya

The Problem: Rapid urbanization in Sub-Saharan Africa (SSA) has resulted in an increase in demand for food. Almost 33% of the SSA population, close to 200 million people, is undernourished. Fruit and vegetable consumption in SSA remains 22-82% below the intake value threshold of 400 grams/day recommended by the World Health Organization and Food and Agricultural Organization. Vegetable growers, mainly small holders, have no access to inputs for improved germplasm, pest and disease control tools, and improved crop production techniques. Vegetable farms are routinely devastated by pests. We propose to harness alternative pest management techniques, micro-climate modifications, and growers’ education and training to improve small-scale vegetable production in East and West Africa

The Approach: A participatory approach was used to demonstrate efficacy of 1) Eco-Friendly Nets (EFN; insect barrier nets, either treated or not with insecticides) at protecting vegetables against pests and associated viral diseases, 2) floating row covers at improving crop micro-climate and enhancing yield and produce quality, 3) assess and address farmers’ perception of EFN to increase the adoption/use of the technology. Experiments were conducted in Benin and Kenya from 2010 to 2013. The first set of experiments was conducted at research stations to refine the net and row cover technologies. In 2013, large scale demonstrations were undertaken in collaboration with producers. The crops evaluated include tomato, cabbage, French bean and watermelon. Training activities for farmers, extension educators, scientists and students were conducted.

Handout on scaling and constraints for pest-exclusion nets:

Eco-friendly netting system that excludes insect pests, thus improving yield and profitability for small-holder vegetable farmers in sub-Saharan Africa (most of whom are women), while reducing or eliminating pesticide use.

CROPS: Most of the conclusive data (improved yields w/reduced pesticides) have been collected on cabbage and tomato. Some preliminary data have been collected on watermelon, but more research is needed for all cucurbits. We need to do more testing on other vegetables, especially on leafy vegetables like kale and lettuce, which do not require pollination to crop. In Kenya a crop like French bean is a huge market (#1 export), and thus by its importance to the economy more data needs to be developed for this crop, especially where grown commercially. It should be noted that Nets increase the yield of indigenous vegetables such as Amaranth, Nightshade and Kale (e.g., microenvironment effect) -- and do so without the need for insecticides. Generally, these indigenous vegetables, used mainly for their leaves, have fewer insect pests compared with exotic vegetables such as tomatoes and cabbages. In addition, “companion plants” [e.g., repellent plants or trap crops (pests), and/or attractant plants (bees)] could be associated with a particular vegetable crop under the Nets. This is especially important in situations where large mesh nets are required for microclimate reasons. Spreading the expense of the initial investment across a greater number of crops extends benefit of initial investment.

MICROENVIRONMENT: Nets provide water use advantages (20% increase in soil moisture) and increased humidity (4%). Additional strategies need to be developed to help reduce temperature increase (2%) inside the Nets used in hot climates like the dry season in Benin – e.g., make cooler nets by manipulating either mesh size, color or both (or angling the frame top).

INVESTMENT: The Nets need to be mass produced and available to growers at a reasonable cost [currently ~10x cost of bed nets (85¢ – 51¢/m2 vs. 8¢/m2), which are subsidized by … WHO, etc.]. Net treatment with appropriate insecticides or repellents would be another strategy to improve efficacy.

BROADER ADOPTION and DIVERSIFIED USE: Nets are a significant investment for a farmer. Commercial-scale demonstrations at export farms in partnership with NGOs in East and West Africa will speed adoption of the technology. For example, if French bean is to be exported, it must meet ever more stringent MRL’s (residue-free?), which should encourage the Ministry of Agriculture, as well as public or private companies, to employ the use of Nets among small/local- & commercial-scale growers.

TECHNOLOGY INTEGRATION: The Nets can be combined with micro-irrigation and plastic mulch. The combination of these technologies should have a synergistic effect to increase the yield and the quality of production, but also to reduce the cost of labor and the efficiency of watering. Also, the same recycling industry for bed-nets will be available for growing agriculture applications.

These handouts were part of the Project Updates Q & A panel at the Horticulture Innovation Lab 2014 Annual Meeting, which took place March 17-21, 2014 in Tegucigalpa, Honduras.

Demonstrating nets and floating row covers in Kenya and Benin

The Horticulture Innovation Lab's international team of collaborators met for its 2014 annual meeting in Tegucigalpa, Honduras. 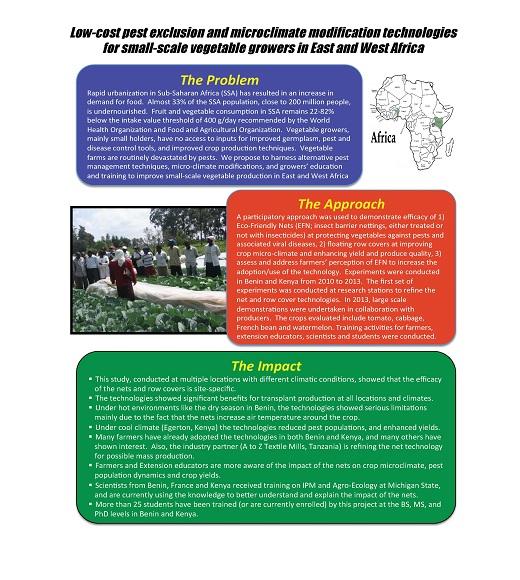